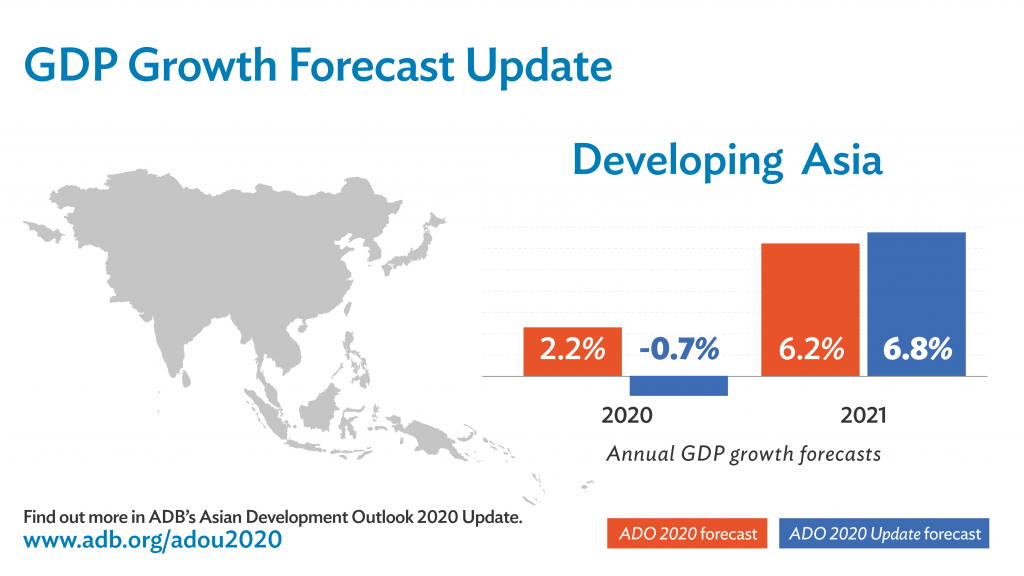 Developing economies across Asia are set to contract this year for the first time in nearly six decades but are likely to begin to emerge from the economic devastation caused by the coronavirus next year according to a report released by the Asian Development Bank (ADB) yesterday. The report, the Asian Development Outlook (ADO) 2020 Update forecasts a GDP contraction of -0.7 percent for developing Asia this year – its first negative growth since the early 1960s.

However, the report goes on to say growth will likely rally to 6.8 percent in 2021 – in part as growth will be measured relative to a weak 2020, leaving next year’s output below pre-COVID-19 projections. With three-quarters of the regions’ economies expecting negative growth in 2020 the ADB is suggesting an “L”-shaped rather than a “V”-shaped recovery for the region.

“Most economies in the Asia and Pacific region can expect a difficult growth path for the rest of 2020. The economic threat posed by the COVID-19 pandemic remains potent, as extended first waves or recurring outbreaks could prompt further containment measures. Consistent and coordinated steps to address the pandemic, with policy priorities focusing on protecting lives and livelihoods of people who are already most vulnerable, and ensuring the safe return to work and restart of business activities, will continue to be crucial to ensure the region’s eventual recovery is inclusive and sustainable,” said ADB Chief Economist Yasuyuki Sawada.

To mitigate the ongoing risk, governments in the region have delivered wide-ranging policy measures, including support packages—mainly income support—amounting to $3.6 trillion, roughly equivalent to about 15 percent of regional GDP.However, the report points out a prolonged COVID-19 pandemic remains a major biggest downside risk to the region’s economic outlook this year and next.

According to the ADB, the PRC is one of the only regional economies bucking the trend with expected grow of 1.8 percent this year and 7.7 percent next, with successful public health measures supporting growth. In India, where lockdowns have stalled consumer and business spending, the ADB estimates GDP contracted by a record 23.9 percent in the first quarter of its fiscal year and is forecast to shrink 9 percent in FY2020 before recovering by 8 percent in FY2021.

The report goes on to highlight other potential downside risks in the region arising from geopolitical tensions, including an escalation of trade and technology disputes between the United States and the PRC; as well as financial vulnerabilities exacerbated by a prolonged pandemic. 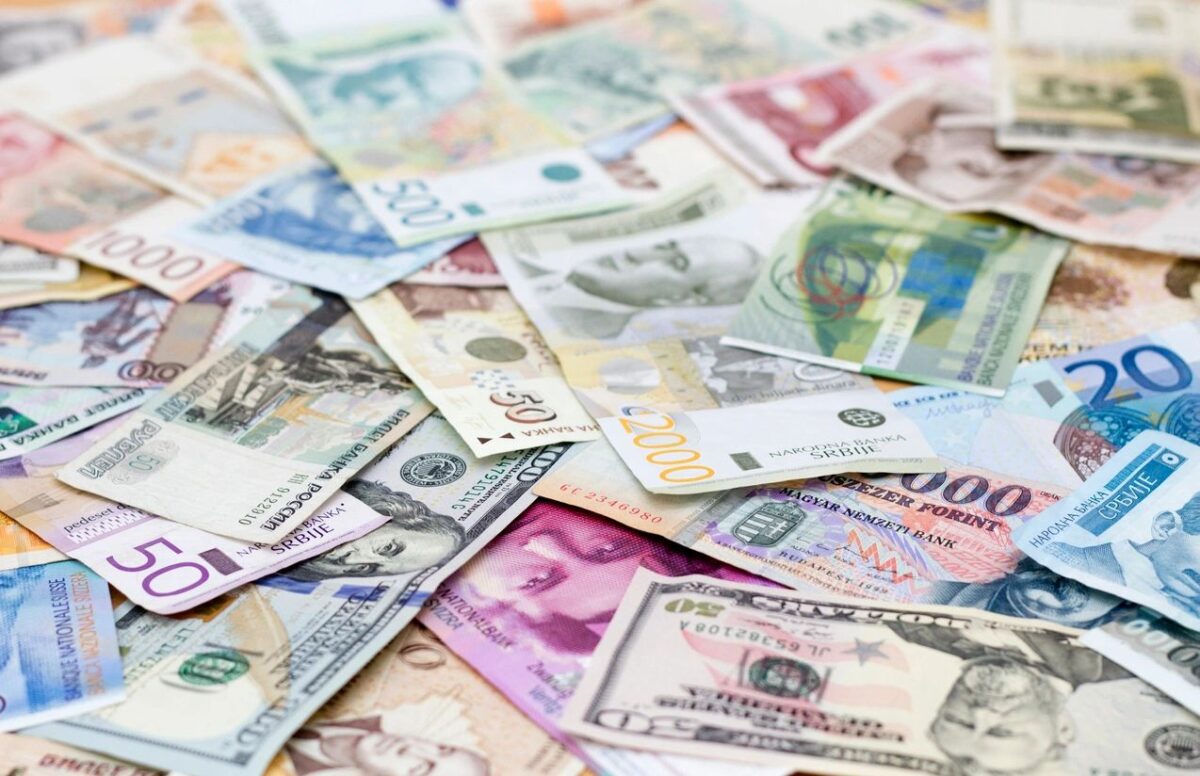 Amid the talk of a new Cold War with China some analysts are warning that China could use weaponize its vast foreign currency reserves – it’s massive US Treasury Bond Holdings (T-Bills) – and dump them on the open market. To understand this arrangement read Understanding China Foreign Exchange.

Often referred to as the ‘nuclear option,’ – and not without good reason –  has the potential to cause a massive spike in U.S. interest rates, sink the US stock market and freeze credit markets, pushing the U.S. even further and deeper into recession. This would of course create major problems for whoever happens to be President.

The problem is, for the alarmists, they underestimate the damage this do to the Chinese economy. Firstly the as the selloff started the overall value of it’s holdings would plummet; meaning China would be getting pennies on the dollar for what it has taken years to save.

A second factor is that such a move would push Beijing’s dream of the RMB as a reserve currency – a hard policy objective for many years – decades into the future. It would also leave the US relatively unscathed in the short term as the Fed – as it loves to do – could simply print the money to buy back the Treasury Bonds, in a kind of Buzz Lightyear QE ‘To Infinity and Beyond’ program. The economic equivalent of kicking the financial can another generation or two down the road.

It would also terrify foreign investors in China as the value of the RMB lost stability. One of the ways Beijing controls the value of the RMB is by maintaining a foreign currency reserve basket – of which, at present T-Bills make up about USD1.1 trillion as of March 31, 2020. The majority of which are held as reserves to collateralize trade and to capitalize China’s banking system.

Furthermore, a mass selloff would put downward pressure on the RMB and force China to devalue it’s currency and continuing the selloff could lead to a depreciation spiral. A spiral that would make it ever harder to retrieve those dollar reserves.

This spiral would have been less of a worry twenty years ago when China could claw back dollars hand over fist with its epic trade surplus. But those days are long gone, and trade surpluses in the future are likely to be far more meagre, especially as China enters uncertain economic territory as the global Covid-19 crisis continues to wreak economic havoc around the world.

But let’s not get complacent. While the ‘nuclear option’ may be off the table, Beijing has many more weapons in it’s arsenal it could use to make more than uncomfortable for the US. An embargo on rare earth minerals would be one.

And where would America’s traditional clients stand?

A Cold War could be emerging between the U.S. and China as the rhetoric out of Washington becomes increasingly belligerent according to media commentators. In fact, the relationship between the world’s two largest economies could be at its lowest point since the Nixon-Kissinger rapprochement of the 70s.  Luckily, so far, both have refrained from escalating to a major blow-up but the ongoing fallout from the Corona Virus might threaten that.

Some had last year referred to increasingly frosty U.S.-China ties as a new Cold War, but that is an entirely inaccurate description. Firstly, the original Cold War was premised on (the largely U.S) notion that the Soviet Union posed an existential threat to the existence of Western Europe as a democratic alley and the was intent on the spread of Communism as an ideology around the world.

The current situation between China and the U.S. is fundamentally different. The conflict between Washington and Beijing is counterbalanced by the two nations’ economic interdependence. A dependence Washington never had with Moscow.

This extensive web of trade and investment relationships developed over the last three decades force the U.S. to counterbalance more extreme positions.

In fact, until recently even officials of the Trump administration did their best to play down sometimes overblown rhetoric.

But unfortunately, those mitigating factors are dissipating somewhat in the wake of the Corona Virus and the talk from Washington is becoming increasingly hostile.

As the devastation from Covid-19 accumulates in the U.S., arguably exposing the failure of decades of underinvestment in infrastructure, healthcare and the growth of the wealth gap, the number American fatalities is now nearly double that of the Vietnam War – a conflict that lasted longer than a decade.

And increasingly, voices in the U.S. government are turning to blame China with the view that the CCP should be held accountable for the devastation gaining ground. Those that support the view distrust China’s narrative (and the CCP in general) of the outbreak.

The problem is, this line of arguing is increasingly looking like a direct assault on the very nature of the CCP not just its handling of the Covid-19 Crisis. Whether this is simply election-year rhetoric remains to be seen. But Washington looks, and more importantly sounds, serious.

On the Chinese side, the accusations are providing ammunition for the propaganda machine that claims the communist regime is superior to the disorganized Western democracies, pointing out how Western nations are still struggling to get a handle on the crisis and how a panicked Trump administration is using the Virus as part of a blame game; deflecting from their own societal shortcomings.

Either way, these are alarming signs at a time when the world most needs to pull together to tackle a problem that has no interest in borders, nationalities or ideologies.

But so long as the two countries remain bound by the interlocking forces of globalization and their own interdependencies then there is a limit to how far this could go.

The problem is, the Pandemic could be at risk of undoing those ties and decoupling the economies. According to Reuters, the U.S. government is now considering all kinds of measures to lessen dependence on China including tax breaks for companies that relocate their production and procurement facilities across a broad range of sectors.

The US has already barred telecom provider Huawei from a stake in its 5G network and pressured its clients follow suite with varying degrees of success and looks like trying to push China out of all America considers ‘it’s sphere of influence.’ And could lead to serious consequences.

Perhaps lurking in the back of some policy maker’s mind’s in the U.S. is Xi Jinping’s bold declaration at the that:

Since then Beijing has rolled out a strategically ambitious project through massive spending on military and civilian technologies.

The perceived expansion of Xi’s power through the Belt and Road infrastructure project is undoubtedly another thorn in the side of foreign policy planners.

One obvious problem this situation represents is for those caught in the middle; Washington’s traditional clients, especially in Europe. A recent survey shows that Germans are now almost equally divided on who represents a more important partner – Washington or Beijing? A significant shift over 2019 which put Washington 26 points ahead.

Although many Germans are unhappy about China’s handling of the Corona-Virus and have suspicions it could have been better handled they don’t wholesale blame all CCP for the chaos being wreaked around the world.

And while traditionally, the German attitude to the US usually reflects who is sitting in the white house the Trump administration’s current perceived mishandling of the crisis; increasing belligerence toward the CCP and the WHO; and the increasing calls for Europe to pay for its own defense are putting traditional allies in a difficult position.

If the U.S. escalates the current spat into a full-blown soft-reboot of the cold war it could find itself in a lonely place with former client states between a rock and a hard place.

More worryingly, a new Cold War between the U.S. and China could have a far larger global impact than that with the USSR.

China is far more economically powerful and technologically advanced than the Soviet Union was, and is catching up with the U.S. in other areas. That could make them dangerous rivals if some kind of accommodation can’t be reached and the world goes down that road.